Csobánkapuszta, home to the S.U.N. gatherings, is in Nógrád county in northern Hungary, an hour’s drive from Budapest. Nógrád is famous for its rolling green hills and mountains, including Börzsöny, Cserhát and Mátra, ruined castles, ancient Gothic churches, baroque palaces. The county is characterised by small villages nestled in the valleys, of which Hollókő, a UNESCO World Heritage site, is the best know. But you find beautiful traditional peasant houses, for which Holókő got recognition, all around the region. You also find a Buddhist retreat with a stupa, and several green projects near us. The area offers many exciting leisure-time activities, including hiking, cycling, museums, good food and more.

Coming by car
If you are coming by car take the highway (M2) from Budapest to Vác. Before you reach Vác turn on the right to direction Rád, then follow the signs until you get to Acsa. There you must turn left to Galgaguta. From Galgaguta turn right to Bercel. When you arrive Bercel, turn left to the center of the village, there turn right to direction Jákotpuszta and Ordaspuszta. After Ordaspuszta follow the signs.

The closest railway station is in Galgaguta, 4 km from Bercel. Trains departure from the Eastern Railway Sation (Keleti Pályaudvar) in Budapest.

It used to be a small settlement consisting of a dozen houses. None of them stand now, although they are still marked on old maps. Unfortunately this is the fate of many traditional Hungarian buildings, settlements. The word “puszta” literally means an open area, but in this region of Hungary it refers to small homesteads, tiny settlements. Some, like Csobánkapuszta, disappeared, others stand empty and are falling apart, and in some still locals live. A few homesteads got saved by city people or organisations, and we also plan to rebuild Csobánkapuszta, based on old traditions but mixing it with some new approaches. 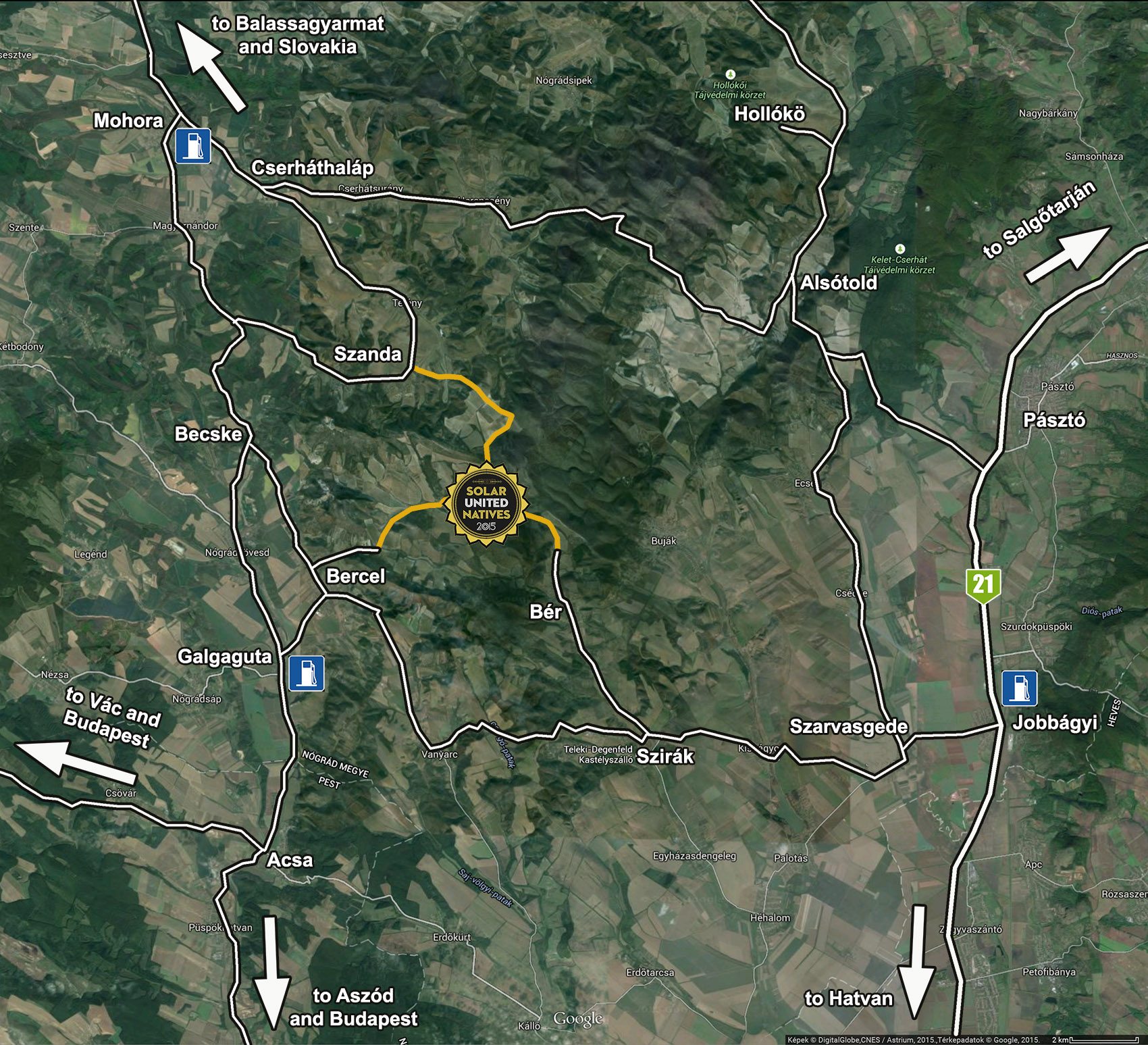 Below are some of the main settlements around Csobánkapuszta that are relevant for visitors. Between these places other little villages exist, not all are marked on the map or described. They all have their own charm and boast some beautiful houses, a church, maybe a village museum or other sights.

The “commercial centre” of the area with a supermarket, ATM, several smaller shops, a weekend market (revived by us), a couple of restaurants, pubs and a tobacco shop. It is also one of the nearest villages from Csobánkapuszta, which makes it a convenient stop.

Between the S.U.N. land and Bercel you find Ordaspuszta and Jákotpuszta. The first consist of a few houses mostly owned by city people and a youth hostel for hikers, the second is a homestead, now home to an environmental NGO.

Another quiet village characteristic of the area near our land and these other settlements, Becske is known for its Buddhist retreat and stupa.

The nearest village north of the S.U.N. land, Szanda stands at the base of a ruined fort on a hill. Forming virtually one settlement, Szandaváralja is right next to it. You find a little shop, pub, café in the settlement. A bit further north is Terény, a quieter village.

To Budapest the road leads through Galgaguta then at Acsa you have two choices: either head to Vác and then Budapest, or to Aszód and then the motorway. To the north Mohora is on the way to Balassagyarmat and Slovakia.

It is a small village with a few houses, a little shop, a guesthouse, and that’s about all. It is relevant for those who stay at the Andezit Hotel in Virágospuszta, near the village. Virágospuszta lies between Bér and the S.U.N. land.

A friendly little place known for its palace, which has been converted to a hotel and welcomes guests. It is at the junction of several roads, including to Bér and Bercel.

A little north of the S.U.N. territory is the famous village of Hollókő, but it’s quite a detour to get there either way you go. If you want to visit it and come back, it makes sense to make a circuit, as there are other pretty villages along both ways. One route goes to the southeast via Szirák, then turns north at Szarvasgede and leads to Alsótold. The other route starts to the northwest, then turns east either at Mohora or Cserháthaláp, and it also takes you to Alsótold. From here it’s only a little more to Hollókő.

To the east runs Road 21, that you can reach at Jobbágyi. To the north it leads to the industrial city of Salgótarján, to the south to Hatvan and the motorway. It is convenient if you head to East Hungary, but to Budapest it’s a detour.